Prototyping solutions to support Syrian refugees with settlement in Canada

Together Project, a project of Tides Canada Initiatives, matches “Welcome Groups” of five or more Canadians or established newcomers with newly-arrived Government Assisted Refugees. Funded by Immigration, Refugees and Citizenship Canada (IRCC), the goal of this project was to design a prototype mobile digital tool to help Syrian refugee newcomers meet first-year settlement milestones. The research project resulted in an insights report and a low-fidelity prototype that was tested with groups of Syrian Government-Assisted Refugee newcomers.

The refugee crisis of 2016 had a huge global impact. Canada took in thousands of Syrian refugees, however, ensuring they are well integrated into their new environment was a challenge. Delays in accessing settlement services can have serious implications for refugee settlement, particularly given the time limits for Resettlement Assistance Programming (RAP) and Interim Federal Healthcare Programming (IFHP). Limited language, knowledge, and social networks serve as serious barriers to service provision. Many of the Government-Assisted Refugees that Together Project works with have serious medical conditions which are not addressed in a timely manner. Others find it very difficult to access community events, resulting in significant social isolation.

GTA settlement agency caseworkers are tasked with roughly forty-five cases on average, which means that GARs are often left to rely on community knowledge or wait for contact from overburdened caseworkers in the crucial first few months of settlement. This can often mean added stress, missed opportunities, and fewer options to engage in community integration activities.

We used qualitative research methods and established HCD activities such as participatory design and ethnographic research through the design process to inform the final solution. This included two UX workshops, one with stakeholders and another with volunteers and newcomers. We also held 8 in-person interviews with newcomers to better understand their needs, goals, and behaviours. We created personas and journey maps to visualize the experience that Syrian GARs and the volunteers working with them go through during their first 12 months in Canada. This led to a blueprint that outlined our strategic vision, design considerations and success metrics.

Our methodology aimed to understand the experience of newcomers during their first 12 months in Canada. In particular, we wanted to identify challenges and barriers, the composition of support networks, and how they use mobile technology in their daily lives. In addition, we focused on speaking with and understanding the needs of volunteers and settlement sector personnel who work with Syrian newcomers given their more significant and sustained experience with the sector and the needs of newly-resettled refugees.

In particular, we used the following activities and methods:

The first phase of research was comprised of several focus groups, interviews, and workshops with stakeholders to develop a clear picture of first-year settlement barriers and milestones. Our first two workshops focused on stakeholders with significant experience in the settlement sector. General discussions about technology use and barriers to settlement were followed by “affinity diagramming”, where participants were led through a process of imagining specific challenges and settlement hurdles while working collaboratively.

Next, stakeholders completed a “future-thinking” exercise, in which they were asked to imagine a future state where a mobile tool was being used by GARs to address the top three challenges previously identified. Participants wrote a ‘Letter from the Future’ about how the tool had impacted the resettlement process.

The stakeholder groups identified three top priorities for the tool to address:

The following UX strategy blueprint was developed to guide the direction of the project: 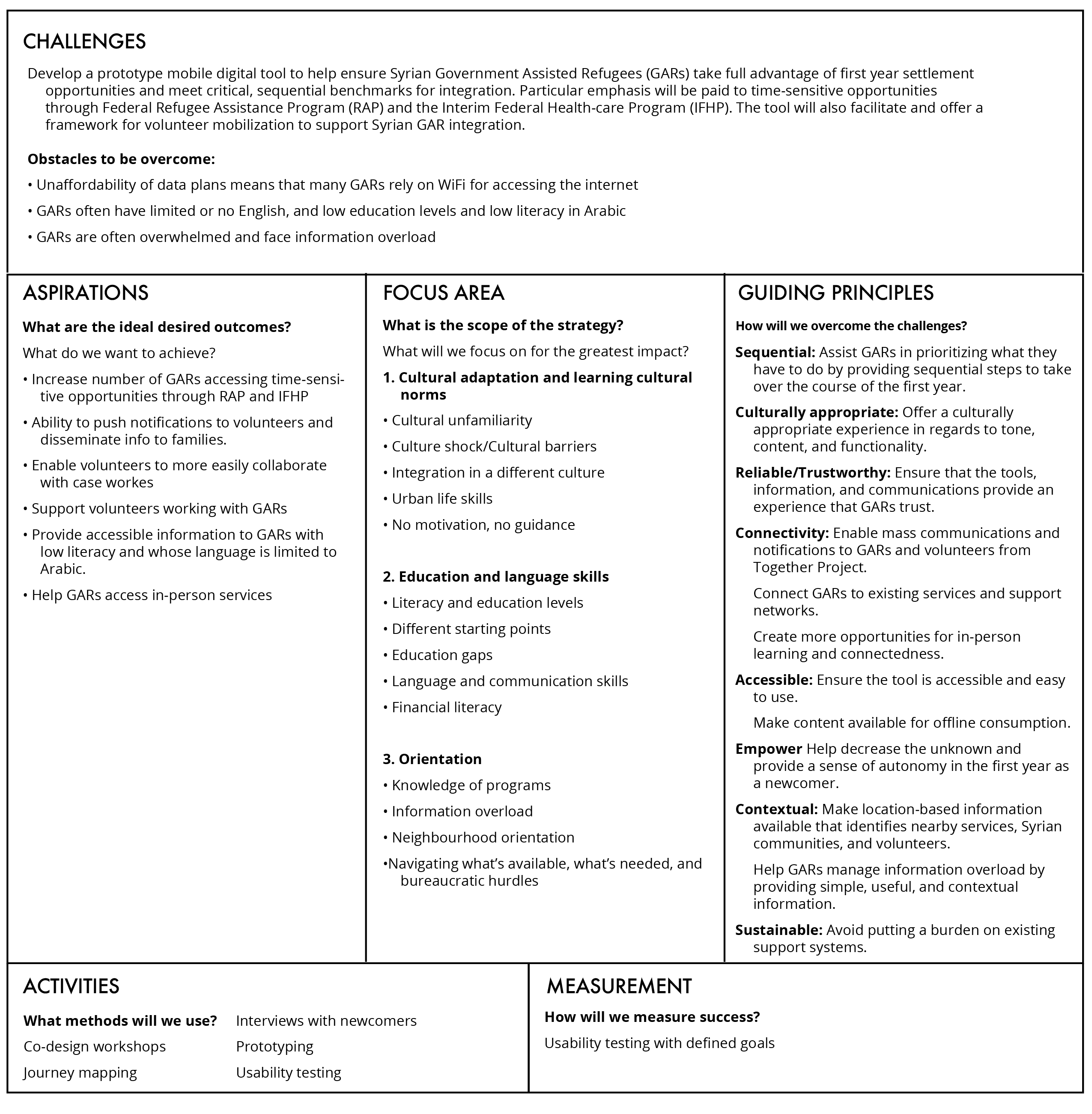 The second phase of research included workshops and interviews with a focus on Syrian newcomers. These activities confirmed the needs addressed by volunteers and stakeholders.  Our approach was to have small groups of four or five participants work together to create maps highlighting the steps they had to complete over the course of the year, including challenges, needs, thoughts, and emotions, through a journey mapping exercise. Each participant also completed a proto-persona, an archetype of either a Syrian newcomer or volunteer, as a method of talking through and externalizing behaviours, motivations, and goals.

Next, we conducted in-person interviews with Syrian GARs in the community in which many of have resettled. Interviews focused on daily life, challenges, support systems, and the use of technology. Participants were asked to map their personal support network. To do this, they drew a circle titled ‘Immediate’, and in this, they wrote down the people or organizations that they rely on most. Outside of the circle, they created another circle titled ‘Secondary’ and wrote down other people and organizations that they rely on.

Our findings led to a series of deliverables. We created personas based on our interviews and workshops with newcomers and volunteers where we observed common groupings of goals and behaviours. They represent the needs of our intended users across a range of contexts and helped us maintain an empathetic and user-centered mindset when prototyping potential solutions. We also created journey maps to visualize the experience that Syrian GARs and the volunteers working with them go through during their first 12 months in Canada. While designing the prototype, we used journey maps as a tool to inform what type of functionality and content would support newcomers during the different stages of resettlement. 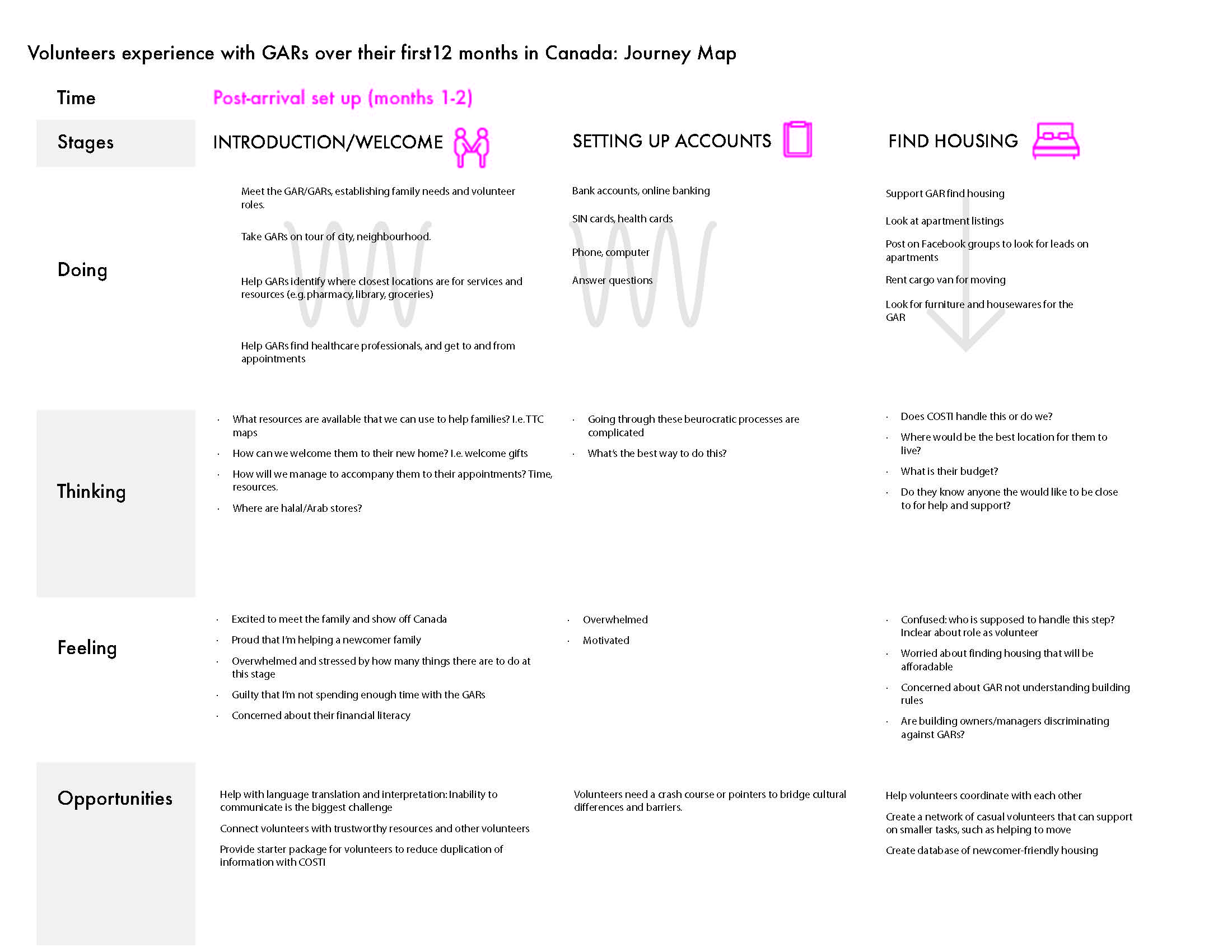 Data and insights from previous phases informed the design of a low-fidelity mobile prototype. The main purpose of the tool was to support users’ needs and goals in the first year of settlement.

‘The Welcome App’ focused on providing support in three ways:

The final phase of the research project was focused on testing this first iteration of the mobile tool. We invited Syrian newcomers to test the app, in order to identify whether or not it would prove valuable, and offer feedback on design, content, and functionality. The main goal was to identify the strengths and weaknesses of the experience to inform the next iteration of the design. We tested the prototype with 8 participants through one-on-one moderated sessions. You can view the prototype here.

Our prototype was received with enthusiasm during the usability tests, and newcomers were eager to know when they would be able to start using the tool. Those involved in the testing viewed it as something that would not only help them understand how to navigate their new home but also the new society in which they were living. They valued opportunities to learn from others and described the tool as a way to have more immersive learning experiences.

Mobile applications like WhatsApp are already successfully being used by newcomers to communicate and retrieve information, and we can build off of a similar design vocabulary in creating a tool that is accessible to newcomers with low literacy and low-tech savviness. Making accessibility a primary design consideration will be critical in developing a successful tool.

Future development would include integrating the findings from usability testing into the next iteration of the mobile app. The app is yet to be validated with volunteers and settlement sector stakeholders and should be tested with other user types such as caseworkers. The final report was submitted to The Government of Canada in March 2017.